Short films can showcase your creative voice and align with your long-term career goals.

Join us for a one-day workshop that will dive into the mahi behind Zia Mandvialla’s acclaimed and widely loved short film Night Shift, providing you with practical examples and ideas to inspire you and your projects.

Night Shift premiered at the Festival de Cannes in 2012, before showing at the New York, Melbourne, Sydney, Sundance and Valladolid Film Festivals, amongst others. It was the last New Zealand short film to make it into Cannes and was a Short Film Palme d’Or nominee. 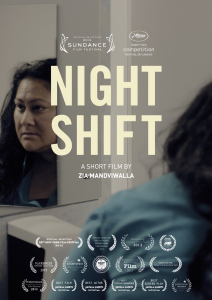 Short film directors residing in Te Waipounamu South Island – you might be a first-time director or have several under your belt. This workshop series is not tailored to documentary or scriptwriting.

A Zoroastrian by birth writer-director Zia Mandviwalla was born in India, grew up in the Middle East and moved to New Zealand in 1996. Her delicately crafted narratives tell stories of people who exist on social peripheries – outsiders, searching for their place in the world.

Zia’s previous short films, Eating Sausage, Clean Linen and Amadi have also received acclaim at festivals around the world. With these films, Zia has represented New Zealand at the Berlinale Talent Campus and at Melbourne’s prestigious Accelerator program. She has received a host of awards for her writing and directing, and in 2009 Zia was named SPADA’s New Filmmaker of the Year.

DEGNZ has up to 6 full scholarships available to support students in the South Island.

You must be at least 18-years-old and studying a screen-related course at a tertiary education provider. To apply, please send us a brief, max. one-page letter telling us:

Email your letter, name and contact details to tema@deganz.co.nz before registrations close.

DEGNZ Full members based outside of Canterbury can apply to the Guild for travel support up to the value of $150 (incl GST).

The Direct South: Short Film Workshops are brought to you with the generous support of the New Zealand Film Commission.

With thanks to our Event Partner

Film Otago Southland (FOS) is thrilled to support the DEGNZ Direct South: Short Film Workshop, to take place in Dunedin Sunday 30 May. FOS is offering up to five travel grants for participants within the Otago and Southland region.

Michelle Savill will lead the Dunedin workshop as a part of the South Island series. Participants might be a first-time director or have several under your belt.

The workshop will be interactively livestreamed through Zoom for those who can’t attend in person. However, Film Otago Southland are also happy to provide travel support for people outside the Dunedin area to attend.

We can offer a maximum of 5 x $100 travel grants to enable participants from outside Dunedin, but who reside within the Otago and Southland region, to attend.

Please email Kahli Scott (kahli@filmotagosouthland.com) to request this support. Confirmation of your workshop registration will be required before the grant will be offered. The first five confirmed applicants will be supported. Any person accepting the grant and failing to attend the workshop in person will be liable to return the grant.

Thousands of short films get made every year by filmmakers around the world. One challenge for directors is how do you direct a short film that gets noticed by audiences and the industry, especially when you invest so much of yourself in your film?

Hear how three filmmakers made their acclaimed shorts and what they learnt doing them. You’ll have the opportunity to ask questions and discover ways to improve your craft and your projects. Direct South brings you three perspectives as each director shares practical insights into their personal directing process for short film.

A hybrid series, workshops will be in Christchurch, Blenheim and Dunedin, while participants can also join and interact with us on Zoom.

Get the full details >