You are here: Home1 / News2 / Programme3 / WIFT, DEGNZ and NZIFF invite members to… 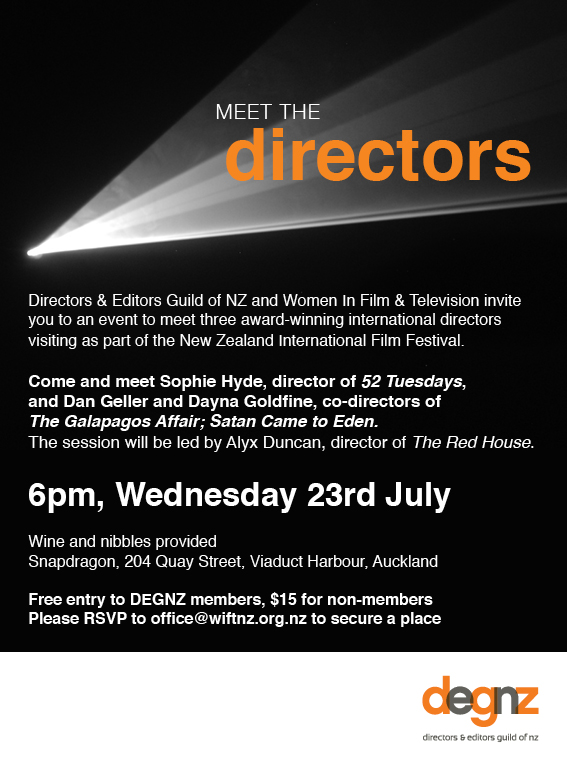 This is a fantastic opportunity to hear direct from international filmmakers about how they bought their film to the screen. For more information about the films they will be discussing, and their screening times as part of the festival, see below:

Sophie Hyde – 52 Tuesdays.Australian born Sophie Hyde won Sundance’s World Cinema Director Award, and Berlin’s youth jury award, the Crystal Bear, with this striking first feature. Set in Adelaide on 52 consecutive Tuesdays, the film follows a year in the life of Billie (Tilda Cobham-Hervey) who, along with the usual social and sexual questioning that 16-year-olds go through, is also responding to the gender transition being undertaken by her mother (played by non-gender-conforming Del Herbert-Jane).Please note if you want to see Sophie’s film the screenings are on the 2 days PRECEDING this event.Screening times: 52 Tuesdays22-Jul-14              6:15 p.m.             SKY CITY23-Jul-14              3:00 p.m.             SKY CITYDan Geller and Dayna Goldfine – The Galapagas AffairAlmost improperly entertaining, this documentary who-dunnit spins a tale of utopian ideals, sexual intrigue  and murderous jealousy – all on tiny Floreana, one of the Galapagos Islands. The events it describes were a media sensation in the 30s, thanks in large measure to the enthusiastic on-film cavorting of the story’s flamboyant femme fatale. Filmmakers Dayna Goldfine and Dan Geller (Ballets Russes) have restored a cornucopia of reportage, archival film and photography and enlisted top-line voice talent, including Cate Blanchett, to explore this bizarre tale anew.The Galapagos Affair: Satan Came to Eden24-Jul-14              6:15 p.m.             SKY CITY25-Jul-14              1:45 p.m.             SKY CITY

Please remember to RSVP to office@wiftnz.org.nz to secure a place to ‘Meet The Directors’, and bring along your membership card for your free entry!We hope to see you there!