You are here: Home1 / Members2 / Advocacy and Lobbying3 / Screen Industry Workers Bill – Have Your Say!

The Directors & Editors Guild of NZ encourages every member to have their say on the Screen Industry Workers Bill that Government has introduced to Parliament.

This Bill is the outcome of the work all the screen sector bodies did during the many months of discussion in the Film Industry Working Group, which resulted in recommendations to the Government.

It’s vitally important for us to see this Bill go through as it will allow DEGNZ to collectively bargain for minimum rates and terms and conditions for all directors, editors and assistant editors.

The closing date for submissions has been extended to Monday, 25 May 2020

The Bill is now in Select Committee and it is calling for submissions from individuals and organisations. DEGNZ is currently working with the New Zealand Writers Guild and Equity New Zealand to make it as easy as possible for members to make their own individual submissions.

Workshops on why and how to make submissions are being led by Equity in April. A template is also available (download below) with suggested wording for you to use if you wish.

Select Committees are influenced by individuals’ opinions, so we would like as many of you as possible to participate in this democratic process and make your voice heard.

Information and background on the Screen Industry Workers Bill

Government fact sheet on the Bill

Link to the Bill’s progress

Link to the whole Bill

Link to make an online submission

Want to have your say but unsure on how to make a submission?

Equity NZ Director Denise Roche will be running free workshops on Zoom for members of Equity, DEGNZ and NZWG. Denise will provide clear and helpful guidance to help you understand what you need to do, without feeling intimidated by the process.

DEGNZ members, please register to attend. The Zoom meeting details will be emailed to you after you’ve registered. 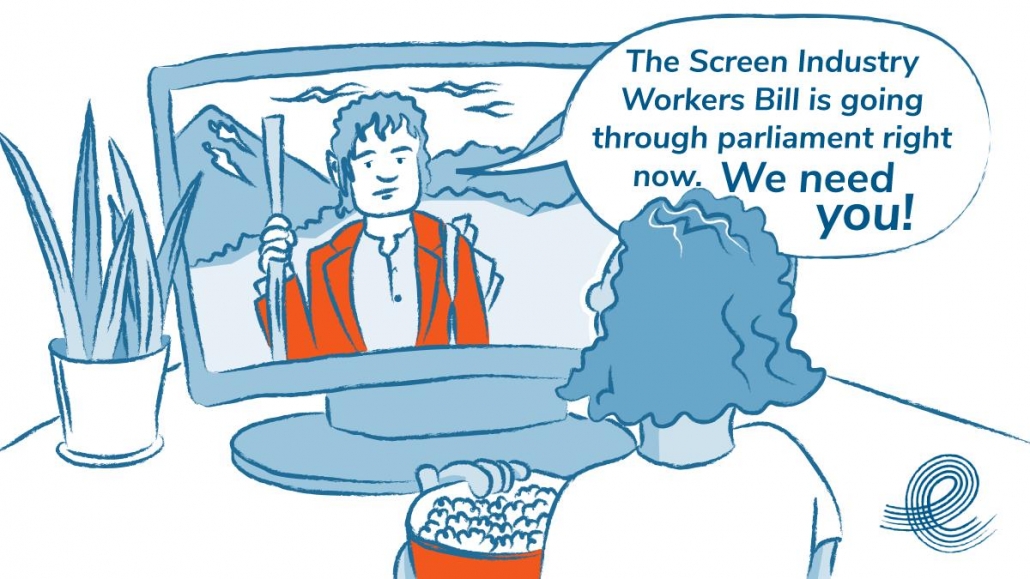 Make a Submission on the Screen Industry Workers’ Bill

Our thanks to Denise Roche, Director of Equity New Zealand, for putting this section together.

The difference between government making a good law and making a great law is YOU.

For over a decade people working in the film industry have not had the same rights as other working people in New Zealand.  In 2010 the government at the time changed the law overnight (the so-called “Hobbit Law”) so that nearly everyone working in the film sector was classified as independent, or self-employed, contractors.  This made it illegal for groups of people doing the same jobs to negotiate collectively for minimum working conditions or pay rates and made it extremely difficult to fight against any unfairness or bullying.

The Screen Industry Workers bill is the result of months of discussions between the different key players in the screen sector who have come up with a set of recommendations that would mean that the screen industry is still a stable environment where overseas productions are happy to invest but it is fairer for the people who work in it.  Working people will still be independent contractors but they:

While this new law does prevent workers in the industry from going on strike or withdrawing their services it does pave a way for your unions to be able to represent you, negotiate for you and legally enforce your rights on the job if you are facing any injustice.

On the whole it’s a good law.  There are areas where it could be strengthened – or processes clarified – but even as it is we think it will benefit hundreds, if not thousands, of people working in the screen sector.

BUT for these law changes to be passed we need to make sure that the politicians who vote on it understand what it’s like working in the screen industry.  There were 57 Members of Parliament who voted against this law in its first reading in the House so we need to let them know what difference this law will make for you.

It may sound a bit daunting but YOU ARE AN EXPERT AT WHAT YOU DO and most people – including the politicians who make the law – are not.   That’s why we need you to make a written submission to the select committee and then follow it up later by speaking to them in person.

Making a submission is pretty straight forward.  You simply say who you are, your address and contact details and then state what you like about this law and – if you want – how you think it could be improved.  Giving examples of how you would be affected by this law change is really compelling too so feel free to write about your own experiences.   (If you want to keep your submission confidential to the select committee make sure you mention that very clearly right at the start of your submission.)

You can make your submission online on the parliament website by following this link.

Or you can be Old School and post a hard copy to the Clerk of the Education and Workforce Select Committee, Select Committee Services, Parliament buildings, Wellington 6160 – you’ll need to send two copies of your submission if you’re doing it this way.

Timeline for how the bill becomes a law

The Labour-led government brought producers, businesses, guilds and unions in the screen sector together into the Film Industry Working Group and asked them to design a model that would allow collective bargaining.

The working group reported back to government with a series of recommendations that were universally agreed by all the different stakeholders.

Those recommendations formed the basis for the Screen Industry Workers’ bill.  It was introduced to parliament on 18th February.

Parliament debated the bill when it was ‘read’ for the first time at the end of February /beginning of March.  It was passed on 5th March by 63 votes to 57

The bill was sent to the Education and Workforce Select Committee and the committee (Select Committees are like working groups of politicians from all the different political parties who look at the bill in detail and explore all the evidence around it.) The select committee called for submissions on the bill – and the deadline was extended due to the Covid-19 emergency measures.

Submissions on the Screen Industry Workers’ bill close on May 4th.

The select committee will hear oral submissions from people who have put in a written submission who have said they want to talk to their statement.

Then next step is that each part of the bill is debated in parliament and amendments can be made to the original draft during a process called the Committee of the Whole House.  After that the finalised bill is read (debated and voted on) for a third and final time.

Once the bill has been voted on for the last time and is passed it will be published and a date set for when it takes effect.

Please do make a submission on the Screen Industry Workers’ Bill.  Under Useful Links/Resources is an example of a cover letter to go with a hard copy submission and some ideas of what you could put in your submission – but really, it comes down to you highlighting what you think are the most important aspects of the bill.

When you make a submission your participation strengthens our democracy.  When you have your say and add your experience to the mix politicians can have a more informed debate – and that means the laws they make for all of us are more robust.