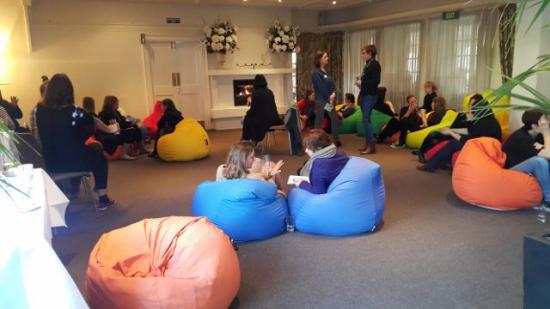 Armagan Ballantyne, Alyx Duncan and Gillian Ashurst will each receive $25,000 to further their commitment to feature filmmaking.

Thirty applications were received for the award which was targeted at female directors who have made one feature film or have equivalent experience in TV, web series, documentary or drama.

As well as submitting a CV, show reel, reference from an industry peer and one-page statement about how they would use the award, the applicants were invited to a day-long workshop in July. The majority of applicants attended the workshop which gave filmmakers the opportunity to discuss together, and with Gaylene, their experiences and frustrations in the film industry.

“I was really keen that the application process be valuable to all involved, and the workshop enhanced this for me.  A peer group have identified each other and hopefully this was of creative value to all the directors involved,” says Preston.  “It was a great way for the NZFC to seriously engage with this group and the workshop kicked off the whole thing very positively.

The recipients of the award were decided by Preston, with input from fellow director, Alison Maclean. “I think you will agree that all these women have already demonstrated strong individual voices in dramatic feature filmmaking with first features that have put them on the international festival radar as ones to watch,” says Preston.

Armagan Ballantyne’s first feature, The Strength of Water, screened In Competition in the Berlin Film Festival’s Generation section.  She will use the Gaylene Preston Directors Award to further develop two feature scripts she wants to direct.

Alyx Duncan’s debut feature, The Red House won a number of awards and had a successful theatrical run at cinemas across New Zealand.  She followed this with animated short film, The Tide Keeper, which has garnered her even more awards and screened at festivals around the world.  She will use the Award to rent office space where she and her collaborators can develop the five feature projects Alyx is currently working on.

Gillian Ashurst’s first film, Snakeskin, premiered at the New Zealand International Film Festival in 2001 and was nominated for eleven New Zealand Film Awards.  Gillian will use the Award to get one of two feature projects she is developing into production within twelve months.

“I would like to be sitting in seat F24 at the Embassy Cinema and see films from all three of these women in the next few years,” says Preston.

”Worldwide, the film industry is focused on finding the next big thing and this award was pitched to women who may not be visible to the industry at large.  I think this process has shown that they are there and in significant numbers.”

A new scholarship will be introduced in 2017 and will focus on an area of the industry where female participation is low.  Feedback from guilds and industry organisations will be taken into consideration when deciding on future scholarship positions.

Directors & Editors Guild of NZ invites you to apply for a 2-day Drama Editing Masterclass with multiple award-winning Australian editor Dany Cooper for up to 8 participants.

Dany Cooper is one of Australia’s best-known and respected film and television editors. This year, she has completed work on U.S. film Measure of a Man and is currently editing Breath, adapted from a book by Australian novelist Tim Winton, and directed by Simon Baker. Her recent editing credits also include Holding the Man, Chasing Satellites, Deadline Gallipoli, The Killing Field and Puberty Blues.

Dany won her first AFI Award in 1994 for the film Angel Baby. She was again nominated for an AFI in 1997 for The Well and in 2006 for Candy, starring Heath Ledger and Abbie Cornish, which also won Dany her first ASE Award. Amongst her list of accolades, Dany has also won an ASE Award for her work on Beneath Hill 60 and Oranges and Sunshine. She was also nominated for an ASE Award and won an AACTA Award for editing the 2012 film The Sapphires, which screened at Cannes, Melbourne, Telluride and other top international festivals. Internationally, Dany was nominated for a 2004 Emmy for TV series Battlestar Galactica.

The masterclass will be held across two days on Saturday and Sunday, 1 and 2 October in Auckland. Travel assistance will be available to some members coming from out of Auckland. Lunch will be provided each day.

All applicants must have a working knowledge of AVID edit systems.

To apply, please send your application in ONE PDF to tema@deganz.co.nz with ‘Dany Cooper Masterclass’ in the subject line. 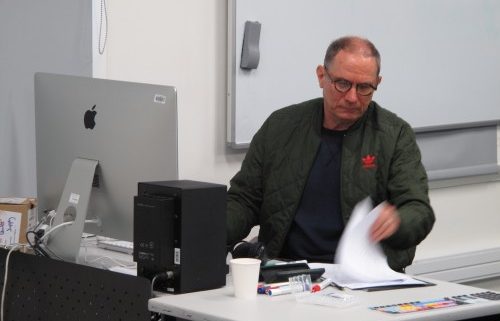 Fresh from cutting Niko Caro’s The Zookeeper’s Wife, starring Jessica Chastain and Daniel  Bruhl, LA-based awarding-winning editor David Coulson ran a two-day Editing Drama Workshop for DEGNZ in Auckland. It was an intimate and highly personal insight into David’s editing philosophy and practice for the editors who attended. 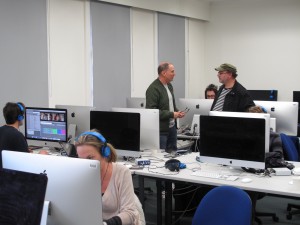 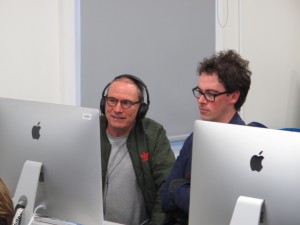 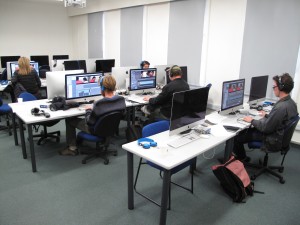 This weekend DEGNZ is running a two-day workshop with award-winning film editor David Coulson. David has a working relationship with director Niki Caro that has seen him edit her last five films, including her latest The Zookeepers Wife, starring Jessica Chastain and Daniel Brühl.

While looking for background information on David I came across an article from a Script to Screen session that was hosted by DEGNZ member and director Leanne Pooley with David and another DEGNZ member, editor Cushla Dillon.

A few comments that David and Cushla made jumped out at me:

David (on letting the writer into the edit suite):
“The writer and I are fundamentally connected, the two processes are inter-related, but when I am working in the suite, that ends. It would be like inviting a thoroughbred horse into a slaughterhouse because what is going on in there can be mercenary and seemingly destructive.  I take scenes the scriptwriter saw at the end and put them at the beginning. I’ve chopped scenes in half and put them in different places. It’s the last stop before this thing rolls out the door for the rest of its life so you have to be open to some of these seemingly destructive possibilities because new things that might not have been envisaged can come from that.”

Cushla (on rhythm):
“My response is purely to the material,” said Cushla. “The script is just a plan or a draft. I read a lot of scripts and when you read a great one, words just roll off the page and you don’t stop and think about how it will all come together. The writer has written a great script – and here’s a tip for writers! Read good, well written scripts, look at how the writer inserts the details without dictating to me how I will cut a scene. I look at how the images respond to each other, taking time to consider and meditate on all the images and the work of the craftspeople involved in the shooting.”

David (on the responsibility of the director to honour the script):
“We always honour the process,” said David. “Someone has written something, then someone has filmed it and then we need to put it all together. To do that, we have to stand back. The script exists only on paper and it doesn’t have the cadences and rhythms of actors speaking or the extraordinary shots that make up a film. The script is the navigation point and we all attempt to faithfully re-create it.”

Cushla and David (on the boundaries when working with a writer/director):
“The editor’s role is that of negotiator,” said Cushla. “I see myself as the audience’s representative. I’m there to interpret the material I see so that it honours the script and the intent of the director but I’m also there to negotiate with the writer/director. If I think they’re not using the best technique to communicate or are a bit misguided, I’ll tell them. For new writer/directors, there is so much to learn and it is an intimate relationship based upon trust. Leave your ego at the door because we’re all here to honour the film and the story it tells. If things don’t work out it doesn’t mean you are a bad filmmaker but let’s use the skills we have to make the best film we can.”

David responded that it is different when the writer/director is there. “It’s hard to generalise because everyone is different but it can be tricky. Some writer/directors I’ve worked with are obsessively protective of what they’ve written and some are the opposite. We can come to a fork in the road: re-interpret a film and make it a good one, a different one, or do the best we can with an idea that really isn’t the best. Every decision that is made in the room has to be dealt with as dispassionately and yet as emotionally as possible, and that is a weird thing. I use humour in the editing suite, especially if the process is gruelling.”

I felt that these are extremely valuable insights for any team heading into a feature film, particular a debut feature. And they highlight a few of the many reasons why you should get the best editor you can onto your project. Thanks to Script-to-Screen for the permission to reprint these takeouts here.

I was at the Melbourne International Film Festival’s 37 South Financing Market last week when Graeme Mason, CEO of Screen Australia and former NZFC CEO, launched the final two parts of their $5 million Gender Matters plan—a $1 million incentive for distributors to look at and consider quality female-driven projects from the outset, and a fund for placements for women on scripted drama projects that have funding from Screen Australia

Two days later, the Australian Directors Guild held a discussion titled ‘Talking Pictures – Breaking the Celluloid Ceiling’, offering an opportunity to meet the women who challenge the notion that men dominate creative leadership in Australian feature film. The panel brought directors Gillian Armstrong, Jocelyn Moorhouse, Sue Brooks, Kitty Green and Sophie Hyde together to talk about navigating the highs and lows of being a female director in the Australian film industry. I was unfortunately unable to attend this but I did hear some opinions after, including a call for Screen Australia dollar spend to be split 50/50 between men and women.

Here in New Zealand at the guild we held two key discussions together with WIFT to look at gender issues in film and TV. From what we learned DEGNZ developed, got funded and launched the Women Filmmakers Incubator, which will start in September. Through five workshops across a 10-month period, the Incubator provides the opportunity for 10 emerging women filmmakers to develop their knowledge, skils and networks to help further their projects and careers.

To help address the gender imbalance in film, the New Zealand Film Commission launched the JC Cinefem Scholarship in 2015, awarded to cinematographer Maria Innes Manchego. Then in 2016, they announced the Gaylene Preston Directors’ Award, a $50,000 grant fund for one or more women filmmakers to advance their practice.

Behind the scenes at NZFC and in other screen organisations, and outside wherever their funding flows to, there is an expectation that there will be gender equity as much as possible in all things.

The above are baby steps that are seeking to address the systematic discrimination against women and their stories in film and television that has been going on for decades. We need to do more, and at DEGNZ we will continue to look for opportunities to do so.

In the meantime, Guys, get used to the idea that for the foreseeable future you are only going to be able to get a bite at 50 per cent of the pie—a situation for many that is long overdue.