We are excited to invite you to the Christmas parties taking place this year in both Auckland (November 30) and Wellington (December 2).

Check out our posters for details and please RSVP on Eventbrite with the links below.

We can’t wait to see you there!

The Big Screen Symposium is coming up fast and we’re excited to be offering a free ticket (valued up to $335!) to a new, first-time member who joins DEGNZ between now and October 6.

The winner will be drawn on October 7, leaving just enough time for them to get ready and go to BSS on the weekend of October 10 and 11.

Spread the word – this is going to be one amazing industry weekend! 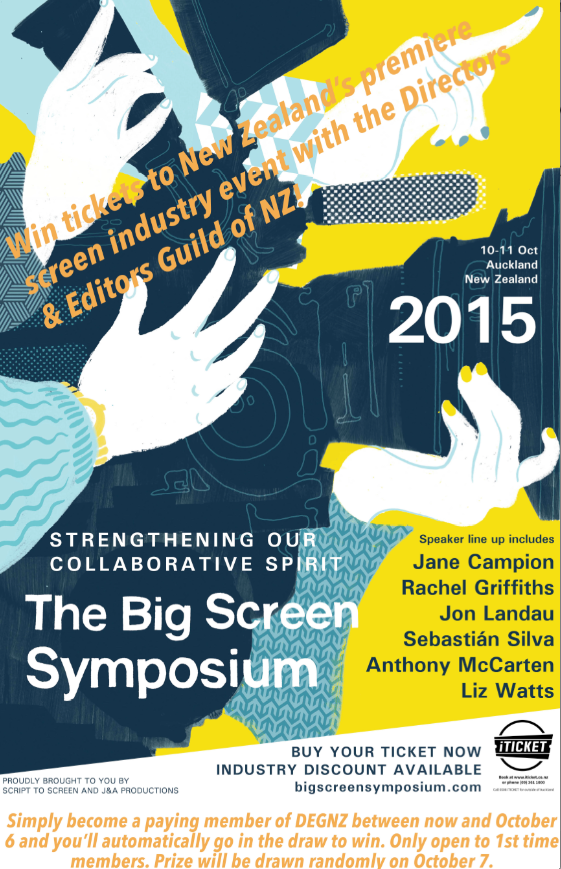 I took some time off work a couple of weeks ago to go to a script development lab in Margaret River with a writer I am working with. There were six Australian writer or writer/directors and their producers there with their projects.

The Australian funding system for screen production is somewhat similar to ours, and the encounter highlighted that we share many of the same difficulties and issues in getting productions up while trying to make a living. For me, it was the first real opportunity to bond with Australian filmmakers, and I did.

The shared experience also extends to the Australian Directors Guild (ADG) and its efforts, and ours, in seeking to secure the financial wellbeing of its members.

A week earlier I paid a visit to Kingston Anderson, the head of the ADG in Sydney, to discuss matters of mutual interest, primarily the struggle to get directors rights recognized when it comes to authorship. The Copyright Act in both countries vests authorship primarily in producers, although Australian directors do have Moral Rights and can access retransmission royalties, which New Zealand directors do not and cannot.*

Just this week, DEGNZ came out in support of the ADG over the Express Dispute Resolution Process that was introduced by Screenrights, a body set up by the Australian government to distribute royalties collected primarily for audio-visual content use in the education sector and government.

If you read our press release, you would have seen that we supported the ADG position:

Screenrights disputes these interpretations. However, the surfacing of this latest development serves to highlight what has been a bug bear for both guilds for some years—the Copyright Act in both countries legislates against our efforts to see directors fairly remunerated for their creative authorship. The Act is a real barrier to securing financial wellbeing for directors by accessing future revenues from their work—Producers are currently seen as the copyright owners and can therefore exploit the primary economic rights. And in reality the revenue generated by retransmission rights that Australian directors can access is minor.

I won’t bore you with any more dry explanation. Suffice it to say we are and will be working more closely with our Australian friends at the ADG on behalf of New Zealand directors. And I hope to be working more with Australian filmmakers. They’re all just like us, really—Not a bad lot.

The Directors & Editors Guild of NZ invite applications from editors with a minimum of 5 years editing experience for eight places on a drama editing workshop with two of New Zealand’s top drama editors, Michael Horton and Jonathan Woodford Robinson.

This will be a very special drama editing workshop with Michael (Second Hand Wedding, Lord of The Rings: The Two Towers, Once Were Warriors, Goodbye Pork Pie) and Jonno (What We Do In The Shadows, Rage, The Last Ocean, Hope and Wire), separately and together, accounting for the editing of a significant volume of New Zealand’s iconic and quality drama and documentary.

The workshop will include:

This is a fantastic opportunity for editors to learn from one of New Zealand’s most highly regarded senior drama editors AND one of its rising stars.

The workshop will be held across two full days on the Saturday and Sunday of 22 and 23 October at The NZ Film and Television School in Wellington. Lunch will be provided each full day.

The selection panel will comprise highly experienced drama and documentary editors Annie Collins and Peter Roberts with input from Michael and Jonno. The selection will be final and no correspondence will be entered into.

All applicants must have a working knowledge of AVID edit systems. If successful, please bring your own settings.

To apply, please send by email to admin@deganz.co.nz with Drama_Editing_Workshop in the subject line your application in ONE pdf, to include:

“ASDACS collects royalties on behalf of New Zealand directors as well, and our directors’ rights are equally impinged by this blatant disregard of directors’ royalty entitlements by Screenrights,” said Executive Director of DEGNZ Tui Ruwhiu.

“The nub of the issue revolves around authorship rights, which unfairly reside largely with the producer in Australia and New Zealand,” Ruwhiu added. “As long as directors are denied their due as the authors of their audiovisual material, New Zealand and Australian directors will miss out on royalties for retransmission.”

DEGNZ (formerly the Screen Directors Guild of New Zealand) has for many years sought legislative change in the New Zealand Copyright Act so that directors are fairly recognised as authors of audio-visual content.

“It will be a major effort to effect the change needed, but it is necessary to ensure directors receive fair and equitable remuneration as creators of audiovisual content,” Ruwhiu concluded.