Last weekend independent filmmaker Jason Stutter of Tongan Ninja, Predicament and Careful With That… entranced 10 budding drama directors with his practical approach to directing film. Jason is a proponent of the Steven Spielberg-style, and covered the master shot method he uses to get fast, efficient and effective wide shots that deliver coverage with little need for relighting. 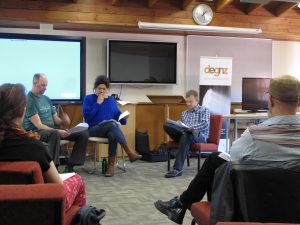 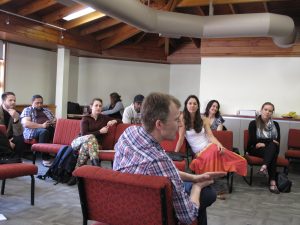 On Day One, Jason spoke at length on his method, reveal tips that work for him to get connection between actors. To illustrate some of his points, he engaged participants in improvisation, and gave his thoughts on rehearsing and how to deal with exposition.

Experienced actors Nicola Kawana and Steven Papps joined the class in the afternoon, when Jason ran through his blocking technique and how he moves actors to final performance using a scene from a highly acclaimed TV drama.

On Day Two, Jason introduced further techniques he uses with actors to develop connection, before moving on to visual effects, technical considerations and the importance of Art Department, Costume, Makeup and other tools that build character.

Having just returned from the American Film market where he pitched his film in post production and his next planned feature, Jason gave everyone the benefit of his market wisdom and knowledge, particularly on the US film making scene.

The afternoon was spent working with talented actors Steven Lovatt, Jeff Szusterman and Rene Lyons as Jason worked through blocking, coverage further techniques on how to get the best performance. 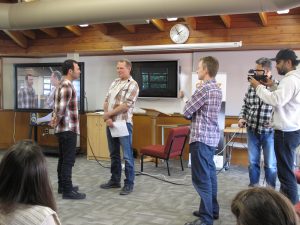 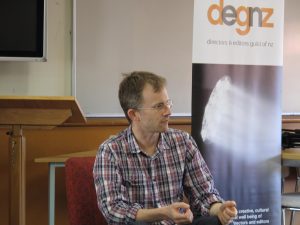 For the directors attending, the benefits were immense:
“This was a very valuable experience and I learnt a lot. I felt very free to question and participate in the workshop. Jason is a great communicator and can pass on the experience he has has to people in a warm and non-threatening way.”

Day Two ended with a discussion over drinks as the participants questioned Jason and the actors, seeking to draw out as much wisdom as possible. Our first, and highly successful, Directors Toolkit!

This event was made possible through the financial support of the New Zealand Film Commission.

A group of about 40 wider industry people attended the ’’Opening the Creative Channels of Communication’’ panel discussion held at the Horse + Trap pub Mt Eden on the 19th of November.

A collaborative event between the Directors and Editors Guild and NZCS, supported with financial assistance from The Film Commission, the widely experienced panel of actor/writer/director Fiona Samuel, editor Peter Roberts and NZCS member cinematographer/director Simon Raby was mediated by producer Christina Milligan.

The informal discussion started with Christina asking Fiona at what stage in the process did she start talking to an editor and DoP. Fiona said that usually it was after the money was in place, but some prior discussions may have happened. She described the process of choosing her DoP and editor as similar to casting her actors and carried the same importance for her. Asked as a writer whether she would involve an editor or DoP in that early part she said that she hadn’t in the past as there was a degree of ‘’working in your pyjamas’’ or ‘’nakedness’’ at that stage, but felt it was something that she would do if there was good reason. Both Peter and Simon felt any early involvement in a project was good for them as it could only help the thought and preparation processes. But of course it started with reading a script.

When asked as editor and DoP what criteria they used for deciding on whether to get on board with a project, both were adamant that making an emotional connection with the story was paramount, and then determining that there was common ground with the director in regard to the tone and style of the project. Simon spoke of visualizing and pacing a story while reading the script. Peter also mentioned getting an early feel for the edit pace of a project through the script. Having a common emotional connection with a story was an underlying theme for all three throughout the discussion. Fiona spoke of the importance to her of spending prep time on location with the DoP, and how it was there that she was able to actually start getting a feeling for how scenes could be staged, with the DoP’s input.

Simon described this time as when the 3D space was considered for it’s realization into a 2D word and the ‘’architecture’’ and look of a project could start to be felt. Also how important it was to use that time to nut out the physical and logistical problems that may arise on location and talk about these with the director regardless of whether the director had a strong technical understanding or not. This time and communication seemed invaluable to both Fiona and Simon. Peter said he very rarely if ever visited locations and that in fact by doing so could prejudice him with preconceived ideas about geography.

Simon and Peter admitted that traditionally there wasn’t a lot of communication between DoP and editor and when there was it usually started with technical discussions re codec’s and slating, etc. But both thought additional communication could only benefit a project. Peter also talked of the editor’s job now becoming bigger with the sheer volume of material that can eventuate with digital capture and the need for all that material to be viewed and organized. To this point Fiona mentioned that she was happy to forgo watching rushes as she was usually ‘’buggered’’ and would only do so if she thought she had a problem. However, all thought that crew screenings of rushes was a good idea and helped with the feeling of inclusion for everyone.

In the edit suite Fiona was always happy to see a new perspective on a scene or listen to what the editor may have to say. When asked about potential difficulties in the edit suite Peter described tricks he has for making directors feel a contrary view point was actually theirs all along. Simon and Peter also felt editing as you go was good for the editor/DoP relationship and very helpful when it came to filling in holes. Plus Simon mentioned it helped fine tune coverage and keep him focused on the ‘’beats’’ of the script he is always looking for.

Peter and Simon both spoke of the role of DIT becoming the ‘’new lab’’ and how although traditionally a camera department job it could easily move into a post job with Peter suggesting it could be done by an assistant editor and thereby giving him an additional set of eyes.

When asked about what made a happy set both Fiona and Simon thought that a crew focused on the story and task at hand made for a good time. Simon mentioned the need for departments to gel and work together and not be insular. Fiona said laughs and light relief were always welcome and important too.

Fiona, Peter and Simon all spoke of their commitment to filmmaking–even with tight budget constraints there was always a desire to give and do the best job possible. Fiona spoke genuinely of the great generosity of creative people and it was obvious to all that a big part of that generosity is making time to communicate. It’s a vital part of the process in our industry and must be nurtured and encouraged.

The panel wrapped up after about an hour or so for a general chat and drink to culminate a really worthwhile event.

Thanks to all who organized and participated! 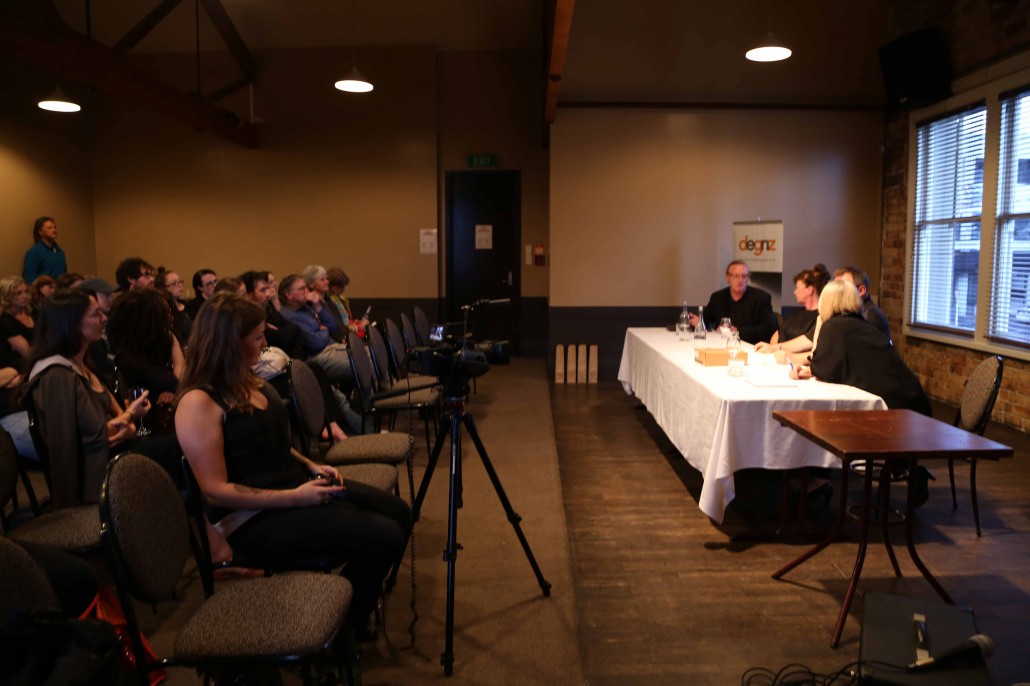 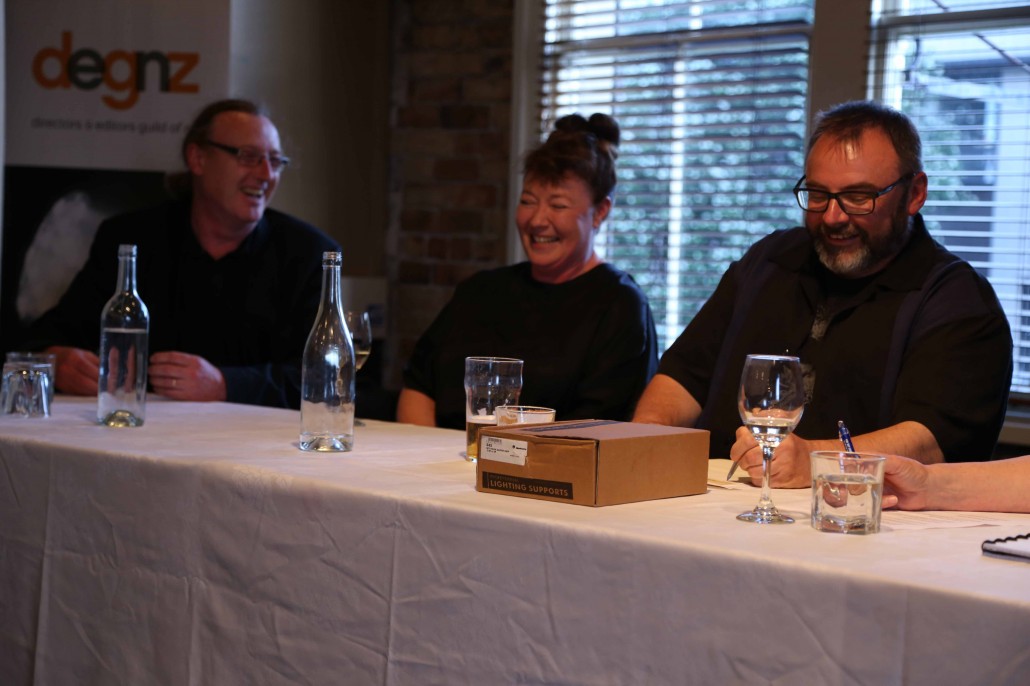